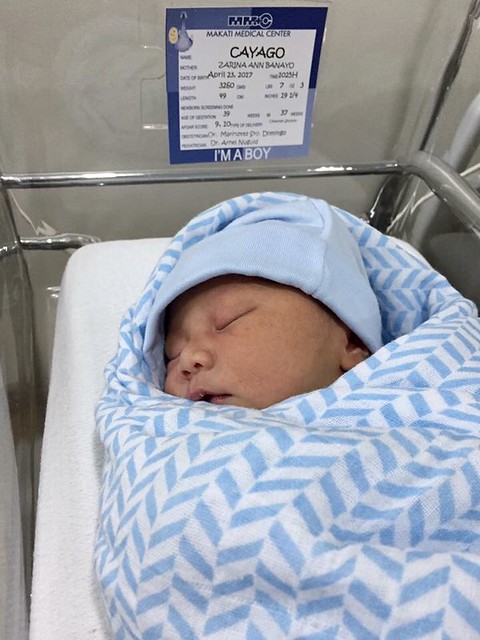 It has been a year (13 months actually 😝) when my little cheeky boy was born.

We were surprised when he came to us and how he unexpectedly came out to the world!

April 22, 2017, Saturday – scheduled check-up. I’m 37 weeks with Z (we call him BBZ, Z, Zubu :P. I think when I went to 7.5 or 8 months, every visit to our OB – Dra. Marinette Sto. Domingo; we are required to have an ultrasound. Check-ups were every 2 weeks instead of monthly. After the check-up, we had plans to meet our friends to have lunch, buffet lunch 😛 HAHA!

It was a normal morning, with our usual check-up and what came after, we did not expect!
In the ultrasound, they detected that I have low amniotic fluid. Not sure what happened? If my water broke already? I did not know. I did not feel contraction pains or whatever, so hearing that was a surprise to us. So with that news, what happened next? We were unprepared! HAHA! I was admitted then and there. No hospital bag prepared, nothing HAHA!
I was admitted to the delivery room, they tried to induce the labor but they kept on saying 2cm. They were referring to the cervical dilation or the opening of the cervix. I think it should be 10cm. I was induced overnight but still no development, I was still 2cm until the morning of April 23. So my OB decided to have an emergency cesarean section. I really wanted to have normal delivery but with the circumstances, we had no choice.

Thanks so much for taking good care of us – to our OB, Z’s pedia and all the staff and nurses of Makati Med!

And then this came, our first struggle as a family – Z’s weight dropped to 12.8%. The doctors said that its normal that the baby’s weight will lower after birth, but within 10%. So Z’s pedia, Dr. Arnel Nuguid, gave us options –
1. Switch to Formula milk.
2. Mix – formula + bf.
3. Breastfeed on demand plus supplement expressed milk.

Since I really wanted to exclusively breastfeed him, Z’s still EBF until now 😊, we chose option #3. Good thing mommas help mommas 😊 I do not have a breast pump yet and when I tried to express milk in the hospital, I could manage 1 – 2 oz. A little hesitant, we asked Ging for extra milk. And without question, she shared some of her milk! That really helped Z 😊 Thanks soooo much Ging and Pablo!

And that’s how we welcomed Zuriel Allen in the outside world! 💜